Wormwood is a woody perennial native to Europe, southern Siberia, Kashmir, and the Mediterranean. This is a strikingly large, soft, and mellow plant for the medicinal landscape.

Wormwood exhibits bitter, carminative, antimicrobial, and anthelmintic properties. Traditionally, wormwood has been used in a wide range of conditions, most of which have been vindicated by scientific analysis of the herb. It is primarily used as a bitter, and therefore has the effect of stimulating and invigorating the whole of the digestive process.

Wormwood may be used where there is indigestion, especially when due to a deficient quantity or quality of gastric juice. Wormwood is a powerful remedy for the treatment of parasitic worms, especially roundworm and pinworm. Wormwood is also used to help the body fight fever and infections. Wormwood is known for success for gallbladder inflammation, indigestion, heartburn, irritable bowel syndrome, and parasites, as well as for poor appetite.

Wormwood is perhaps best known for its oil to prepare certain alcoholic beverages, most notably vermouth and absinthe; absinthe was popular in the nineteenth century in Europe, though it caused many health issues such as brain damage, due to the doses that were given.

Wormwood oil continues to be used as a flavouring agent for foods, although in much smaller amounts than were found in absinthe. Medicinally, wormwood was traditionally used as a bitter to improve digestion, to fight worm infestations, and to stimulate menstruation. It was regarded as a useful remedy for problems involving the liver and gallbladder.

The aromatic oil of wormwood contains the toxins thujone and isothujone. Small amounts of this oil are present in wormwood teas or tinctures. Although the oil destroys various types of worms, it may cause, in excessive amounts, damage to the human nervous system. Strong bitters are also present in the plant that are known as absinthin and anabsinthin, which are known to stimulate digestive functions.

DIRECTIONS OF USE
Adults: Take 2–3 capsules three times daily or as directed by your health-care practitioner. Do not exceed above dose.

Duration of use: Consult a health-care practitioner for use beyond 3–4 weeks. 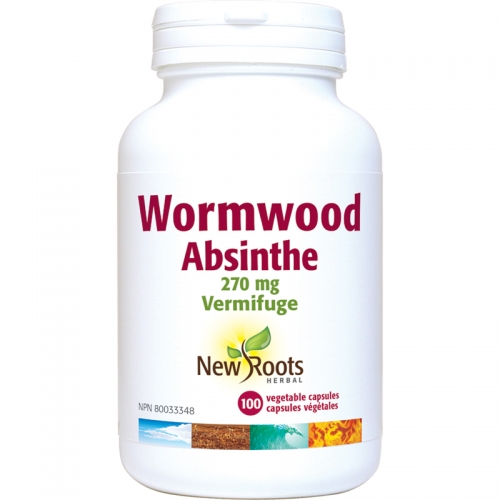 (Newsletters in french only)
PRIVACY: Your email address will be kept in a secure environment and will be used only to send you newsletters from us. In any case, your email will not be disclosed or sold to third parties.

UNSUBSCRIBE: Please note that all our newsletters contain an unsubscribe link, but you can unsubscribe immediately by selecting "Unsubscribe" in the form above.